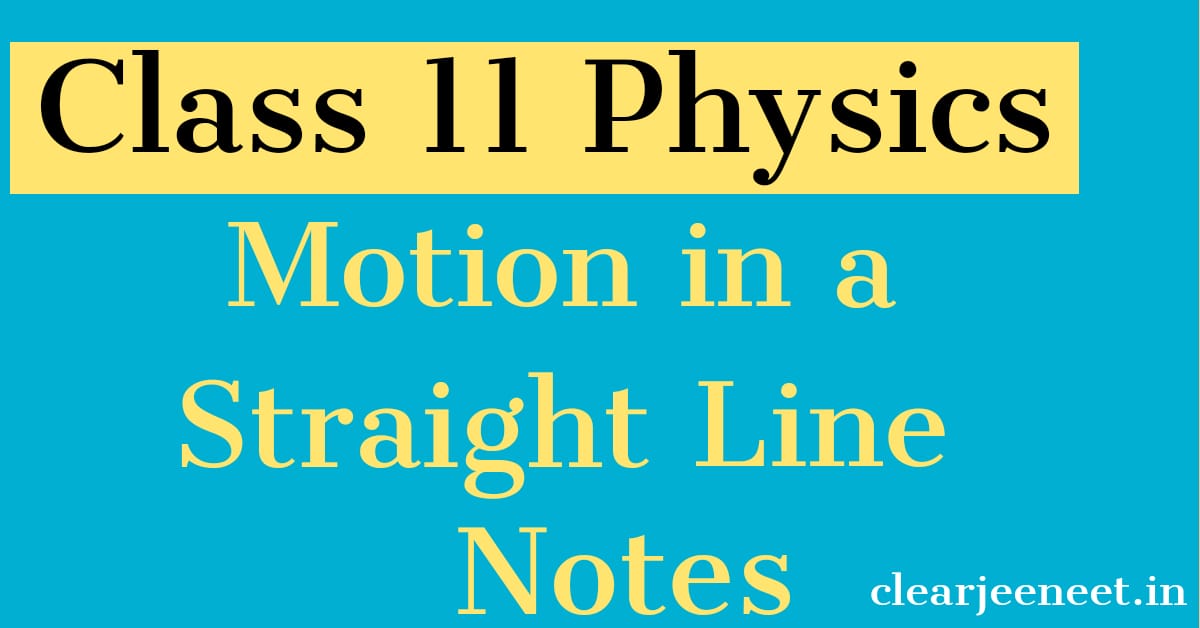 Motion in a Straight Line Detailed notes for the prep of JEE/NEET. This note is the best for your competitive exam preparation like JEE.NEET.

MOTION IN A STRAIGHT LINE Detailed Notes for JEE/NEET

Distance or Path length : The length of the actual path travelled by an object during motion in a given interval of time is called the distance travelled by that object or path length. It is a scalar quantity.
Displacement : It is the shortest distance between the initial and final position of an object and is directed from the initial position to the final position. It is a vector quantity.
KEEP IN MEMORY

Average Velocity : It is ratio of the total displacement to the total time taken.

When the motion is uniformly accelerated i.e., when acceleration is constant in magnitude and direction :

Take rest of physical quantities such as u, v, t and s as positive.
Approach 2 : (Vector method)Assume one direction to be positive and other negative. Assign sign to all the vectors (u, v, a, s), +ve sign is given to a vector which is directed to the positive direction and vice-versa

Normally the direction taken is as drawn above. But it is important to note that you can take any direction of your choice to be positive and the opposite direction to be negative.
Note:-  The second method (or approach) is useful only when there is reversal of motion during the activity concerned.
KEEP IN MEMORY

Please note that when the case is of non-uniform acceleration we use calculus (differentiation and integration).
In fact calculus method is a universal method which can be used both in case of uniform as well as non-uniform acceleration.
Incorrect. Taking average velocity same as that of instantaneous velocity. Correct. Average velocity (where is position vector at time ti and is position vector at time  tf).Whereas instantaneous velocity

In this graph time is plotted on x-axis and displacement on y-axis.

RELATIVE VELOCITY (IN ONE DIMENSION)

Similarly, relative velocity of B w.r.t. A