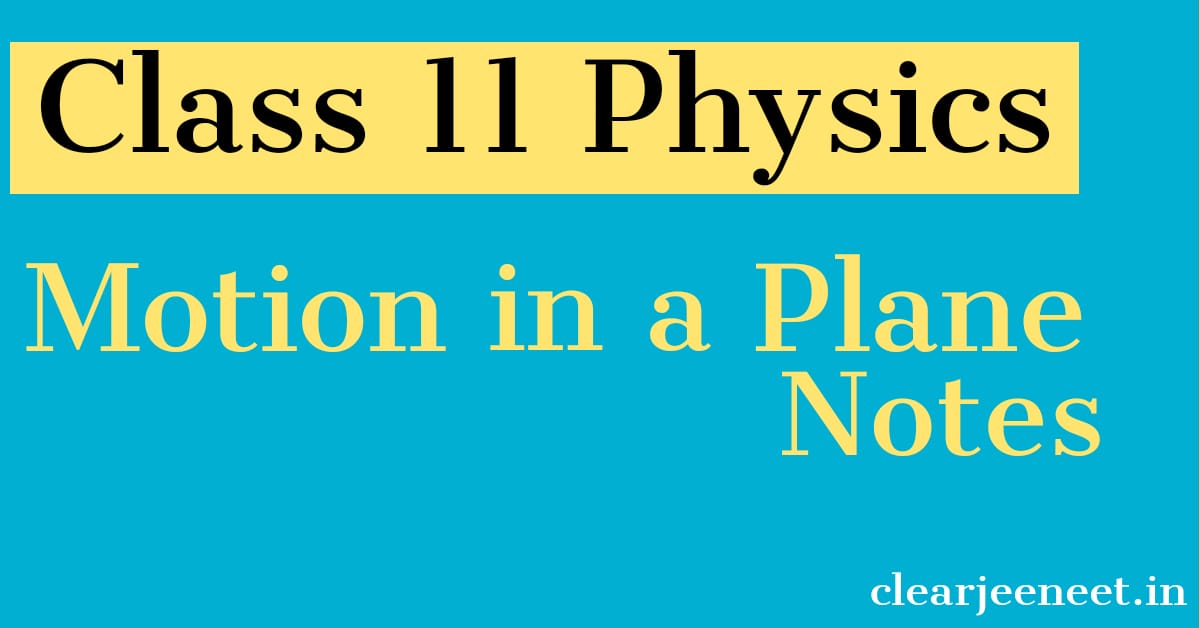 Motion in a Plane Detailed notes for the prep of JEE/NEET. This note is the best for your competitive exam preparation like JEE.NEET.

MOTION IN A PLANE Detailed Notes for JEE/NEET

Scalars : The physical quantities which have only magnitude but no direction, are called  scalar quantities.For example – distance, speed, work, temperature, mass, etc.Scalars are added, subtracted, multiplied and divided by ordinary laws of algebra.
Vectors : For any quantity to be a vector,

For example – displacement, velocity, force, etc.
Note – Electric current has magnitude as well as direction but still it is not treated as a vector quantity because it is added by ordinary law of algebra.

LIKE VECTORSVectors having same direction are called like vectors. The magnitude may or may not be equal.

are like vectors. These are also called parallel vectors or collinear vectors.
EQUAL VECTORSVectors having same magnitude and same direction are called equal vectors.

Thus, equal vector is a special case of like vector.
UNLIKE VECTORSVectors having exactly opposite directions are called unlike vectors. The magnitude may or may not be equal.

are unlike vectors.
NEGATIVE VECTORSVectors having exactly opposite direction and equal magnitudes are called negative vectors.

Thus negative vectors is a special case of unlike vectors.
UNIT VECTORVector which has unit magnitude. It represents direction only. For example take a vector

. Unit vector in the direction of

is ,  which is denoted as

, is read as “B cap” or “B caret”.
ORTHOGONAL UNIT VECTORA set of unit vectors, having the directions of the positive x, y and z axes of three dimensional rectangular coordinate system are denoted by . They are called orthogonal unit vectors because angle between any of the two unit vectors is 90º.

The coordinate system which has shown in fig. is called right handed coordinate system. Such a system derives its name from the fact that right threaded screw rotated through 90º from OX to OY will advance in positive Z direction as shown in the figure.
NULL VECTOR (ZERO VECTOR)A vector of zero magnitude is called a zero or null vector. Its direction is not defined. It is denoted by 0.
Properties of Null or Zero Vector :

i.e.,
AXIAL VECTORVector associated with rotation about an axis i.e., produce rotation effect is called axial vector. Examples are angular velocity, angular momentum, torque etc.
COPLANAR VECTORSVectors in the same plane are called coplanar vectors.
POSITION VECTORS AND DISPLACEMENT VECTORSThe vector drawn from the origin of the coordinate axes to the position of a particle is called position vector of the particle. If A (x1, y1, z1) and B (x2, y2, z2) be the positions of the particle at two different times of its motion w.r.t. the origin O, then position vector of A and B are

The displacement vector is

is given by where is the angle between

makes an angle with the direction of

. Then from right angle triangle QNO,

, inclined at angle are represented by sides of parallelogram OPQS, then resultant vector

is represented by diagonal of the parallelogram.

If a number of non zero vectors are represented by the (n–1) sides of an n-sided polygon then the resultant is given by the closing side or the nth side of the polygon taken in opposite order.

, where is modulus or magnitude of vector

RESOLUTION OF A VECTOR

RECTANGULAR COMPONENTS OF A VECTOR IN PLANE

⇒ A cos θ and A sin θ are the magnitudes of the components of in X and Y-direction respectively.Also

RECTANGULAR COMPONENTS OF A VECTOR IN 3D

The scalar or dot product of two vectors A and B is a scalar, which is equal to the product of the magnitudes of  and and cosine of the smaller angle between them.

PROPERTIES OF SCALAR OR DOT PRODUCT

is through the smaller angle between them.

PROPERTIES OF VECTOR OR CROSS PRODUCT

It states that if three forces acting at a point are in equilibrium, then each force is proportional to the sine of the angle between the other two forces.

MOTION IN A PLANE OR MOTION IN TWO DIMENSIONS

The motion in which the movement of a body is restricted to a plane is called motion in a plane.
Example : A ball is thrown with some initial velocity (u) and making angle θ with horizontal.

The general approach to solve problem on this topic is to resolve the motion into two mutually perpendicular coordinates. One along X-axis and other along Y-axis. These two motions are independent of each other and can be treated as two separate rectilinear motions.

The velocity v and acceleration a can be resolved into its x and y components.

The ratio of the displacement and the corresponding time interval is called the average velocity.

Average velocityInstantaneous velocity   The magnitude of  v = The direction of the velocity, ∴

The average acceleration in a x–y plane in time interval Δt is the change in velocity divided by the time interval.

If two objects A and B moving with velocities VA and VB with respect to some common frame of reference, then :

Projectile is the name given to a body thrown with some initial velocity in any arbitrary direction and then allowed to move under the influence of gravity alone.
Examples : A football kicked by the player, a stone thrown from the top of building, a bomb released from a plane.
The projectile moves under the action of two velocities:

The horizontal and vertical motions are independent of each other.

v = If β is the angle made by with the horizontal, then tanβ = =
TIME OF FLIGHT AND HORIZONTAL RANGEIf h is the distance of the ground from the point of projection, T is the time taken to strike the ground and R is the horizontal range of the projectile thenT = and
Case 1 : If the projectile is projected from the top of the tower of height ‘h’, in horizontal direction, then the height of tower h, range x and time of flight t are related as :

The components of the initial velocity in the X-direction and Y-direction are u cos θ and u sin θ respectively. Then at any instant of time t,
MOTION ALONG X-AXISux = ucosθ,  ax = 0

and the instantaneous angle (β) with horizontal is given by

PROJECTILE ON AN INCLINED PLANE

If maximum height above the inclined plane is H,

An object moving in a circle with a constant speed is said to be in uniform circular motion. Example – Motion of the tip of the second hand of a clock.
ANGULAR DISPLACEMENT : Change in angular position is called angular displacement (dθ).

This acceleration is always directed radially towards the centre of the circle.
CENTRIPETAL FORCE : The force required to keep a body moving in uniform circular motion is called centripetal force.

An object moving in a circle with variable speed is said to be in non-uniform circular motion. If the angular velocity varies with time, the object has two accelerations possessed by it, centripetal acceleration (ac) and Tangential acceleration (aT) and both perpendicular to each other.