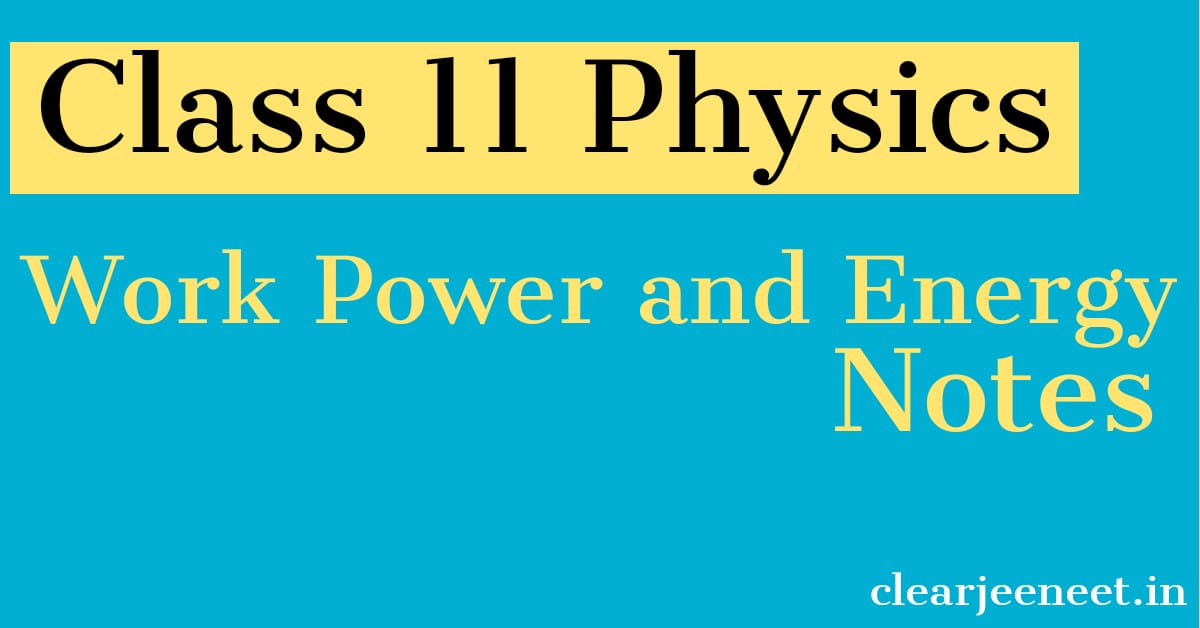 Work Power and Energy Detailed notes for the prep of JEE/NEET. This note is the best for your competitive exam preparation like JEE.NEET.

WORK DONE BY A CONSTANT FORCE

Where θ is the angle between the applied force and displacement. The S.I. unit of work is joule, CGS unit is erg and its dimensions are [ML2T–2].1 joule = 107 erg

WORK DONE BY A VARIABLE FORCE

When the force is an arbitrary function of position, we need the techniques of calculus to evaluate the work done by it. The figure shows Fx as function of the position x. We begin by replacing the actual variation of the force by a series of small steps.

As the size of the steps is reduced, the tops of the rectangle more closely trace the actual curve shown in figure. If the limit Δx → 0, which is equivalent to letting the number of steps tend to infinity, the discrete sum is replaced by a continuous integral.

Thus, the work done by a force Fx from an initial point A to final point B is

The work done by a variable force in displacing a particle from x1 to x2 = area under force displacement graph
CAUTION : When we find work, we should be cautious about the question, work done by which force? Let  us take an example to understand this point. Suppose you are moving a body up without acceleration.

It is the capacity of doing work. Its units and dimensions are same as that of work.

The energy possessed by a body by virtue of its position or configuration is called potential energy. Potential energy is defined only for conservative forces. It does not exist for non-conservative forces.
ELASTIC POTENTIAL ENERGY (POTENTIAL ENERGY OF A SPRING)Let us consider a spring, its one end is attached to a rigid wall and other is fixed to a mass m. We apply an external force on mass m in the left direction, so that the spring is compressed by a distance x.

If spring constant is k, then energy stored in spring is given byP.E. of compressed spring = ½kx2Now if the external force is removed, the mass m is free to move then due to the stored energy in the spring, it starts oscillating
GRAVITATIONAL POTENTIAL ENERGYWhen a body is raised to some height, above the ground, it acquires some potential energy, due to its position. The potential energy due to height is called gravitational potential energy. Let us consider a ball B, which is raised by a height h from the ground.

The graph between and is a rectangular hyperbola

The graph between Ek and is a rectangular hyperbola

Work done by the non-conservative force in moving a body in a closed loop is  non-zero.

LAW OF CONSERVATION OF MECHANICAL ENERGY

LAW OF CONSERVATION OF ENERGY

Energy is of many types – mechanical energy, sound energy, heat energy, light energy, chemical energy, atomic energy, nuclear energy etc.
In many processes that occur in nature energy may be transformed from one form to other. Mass can also be transformed into energy and vice-versa. This is according to Einstein’s mass-energy equivalence relation,  E = mc2. In dynamics, we are mainly concerned with purely mechanical energy.
The study of the various forms of energy and of transformation of one kind of energy into another has led to the statement of a very important principle, known as the law of conservation of energy.
“Energy cannot be created or destroyed, it may only be transformed from one form into another. As such the total amount of energy never changes”.
KEEP IN MEMORY

Power of the body is defined as the time rate of doing work by the body. The average power Pav over the time interval Δt is defined by …(i)And the instantaneous power P is defined by …(ii)Power is a scalar quantityThe S.I. unit of power is joule per second 1 joule/sec = 1wattThe dimensions of power are [ML2T–3]

(force is constant over a small time interval) So instantaneous power (or instantaneous rate of working) of a man depends not only on the force applied to body, but also on the instantaneous velocity of the body.

Collision between two bodies is said to take place if either of two bodies come in physical contact with each other or even when path of one body is affected by the force exerted due to the other.

Forces involved in the interaction of elastic collision are conservative in nature.

When a body of mass m collides obliquely against a stationary body of same mass then after the collision the angle between these two bodies is always 90°.

ELASTIC COLLISION IN ONE DIMENSION (HEAD ON)

Let two bodies of masses M1 and M2 moving with velocities u1 and u2 along the same straight line, collide with each other. Let u1>u2.  Suppose v1 and v2 respectively are the velocities after the elastic collision, then:According to law of conservation of momentum …(1)

Let two bodies A and B collide inelastically. Then from law of conservation of linear momentum M1u1 + M2u2 = M1v1+M2v2 …(i)

In this collision, the individual bodies A and B move with velocities u1 and u2 but after collision move as a one single body with velocity v.So from law of conservation of linear momentum, we haveM1u1+M2u2=(M1+M2)V …(i)or  …(ii)

This is the case of collision in two dimensions. After the collision, the particles move at different angle.