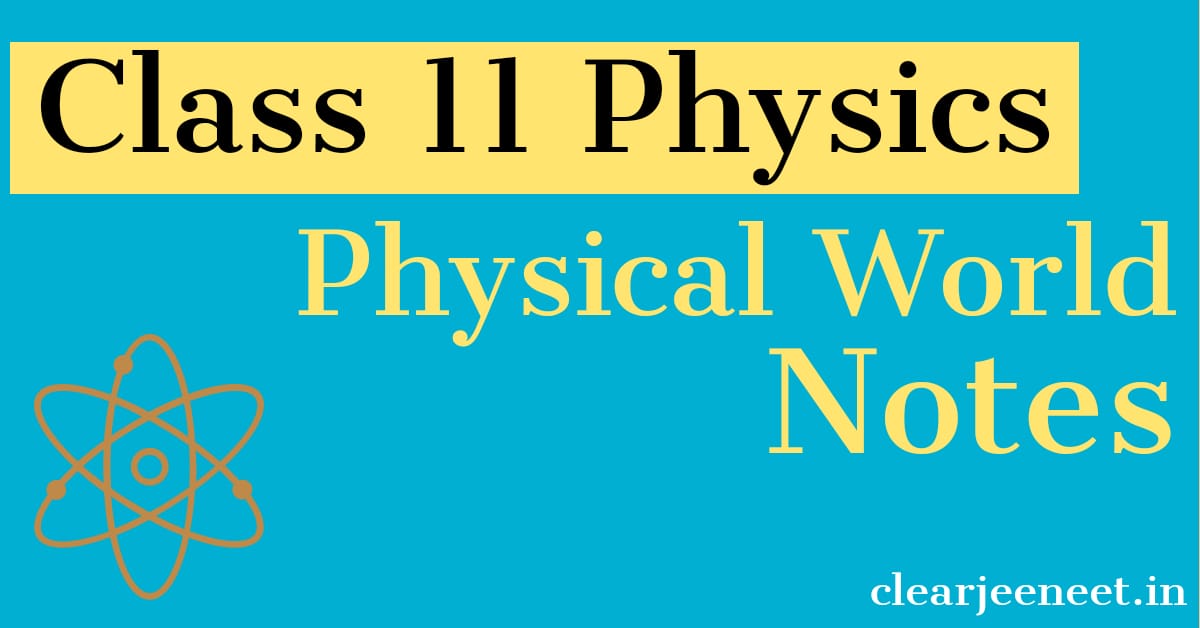 Physical World Detailed notes for the prep of JEE/NEET. This note is the best for your competitive exam preparation like JEE.NEET.

Science refers to a system of acquiring knowledge. This system uses observation and experimentation to describe and explain natural phenomena. The term science also refers to the organized body of knowledge that people have gained using that system. Less formally, the word science often describes any systematic field of study or the knowledge gained from it.
The purpose of science is to produce useful models of reality. Most scientific investigations use some form of the scientific method.
The scientific method is a logical and rational order of steps by which scientists come to conclusions about the world around them. The Scientific method helps to organize thoughts and procedures so that scientists can be confident in the answers they find. Scientists use observations, hypotheses, and deductions to make these conclusions.
Science as defined above is sometimes called pure science to differentiate it from applied science, which is the application of research to human needs. Fields of science are commonly divided into two major categories.

The word physics originates from a Greek word that means nature. Physics is the branch of science that deals with the study of basic laws of nature and their manifestation of various natural phenomena.
There are two main thrusts in physics :

SCOPE AND EXCITEMENT OF PHYSICS

The scope of physics is very vast. It covers a tremendous range of magnitude of physical quantities like length, mass, time, energy, etc. Basically, there are two domains of interest : macroscopic and microscopic. The macroscopic domain includes phenomena at the laboratory, terrestrial and astronomical scales. The microscopic domain includes atomic, molecular and nuclear phenomena.
Classical physics deals mainly with macroscopic phenomena consisting of the study of heat, light, electricity, magnetism, optics, acoustics, and mechanics. Since the turn of the 20th century, the study of quantum mechanics and relativity has become more important. Today, physics is often divided into branches such as nuclear physics, particle physics, quantum physics, theoretical physics, and solid-state physics. The study of the planets, stars, and their interactions is known as astrophysics, the physics of the Earth is called geophysics, and the study of the physical laws relating to living organisms is called biophysics

Physics generates new technologies and these technologies have made our lives comfortable and materially prosperous. We hear terms like science, engineering , technology all in same context though they are not exactly same.

In the real world, these disciplines are closely connected. Scientists often use technologies created by engineers to conduct their research. In turn, engineers often use knowledge developed by scientists to inform the design of the technologies they create.

LINK BETWEEN TECHNOLOGY AND PHYSICS

DOES IMAGINATION PLAY ANY ROLE IN PHYSICS?

Yes, imagination has played an important role in the development of physics. Huygen’s principle, Bohr’s theory, Maxwell equations, Heisenberg’s uncertainty principle, etc. were the imaginations of the scientists who successfully explained the various natural phenomena.

HOW IS SCIENCE DIFFERENT FROM TECHNOLOGY?

Science is the study of natural laws while technology is the practical application of these laws to daily life problems.

Among these forces gravitational force is the weakest and strong nuclear force is the strongest force in nature.

Physicists are trying to derive a unified theory that would describe all the forces in nature as a single fundamental law. So far, they have succeeded in producing a unified description of the weak and electromagnetic forces, but a deeper understanding of the strong and gravitational forces has not yet been achieved.

PROGRESS IN UNIFICATION OF DIFFERENT FORCES/DOMAINS IN NATURE

WHAT IS ELECTROMAGNETIC FORCE?

It is the force due to the interaction between two moving charges. It is caused by the exchange of photons (γ) between two charged particles.

A physical law, scientific law, or a law of nature is a scientific generalization based on empirical observations of physical behavior. Empirical laws are typically conclusions based on repeated scientific experiments and simple observations over many years, and which have become accepted universally within the scientific community. The production of a summary description of nature in the form of such laws is a fundamental aim of science.
Physical laws are distinguished from scientific theories by their simplicity. Scientific theories are generally more complex than laws. They have many component parts and are more likely to be changed as the body of available experimental data and analysis develops. This is because a physical law is a summary observation of strictly empirical matters, whereas a theory is a model that accounts for the observation, explains it, relates it to other observations, and makes testable predictions based upon it. Simply stated, while a law notes that something happens, a theory explains why and how something happens.