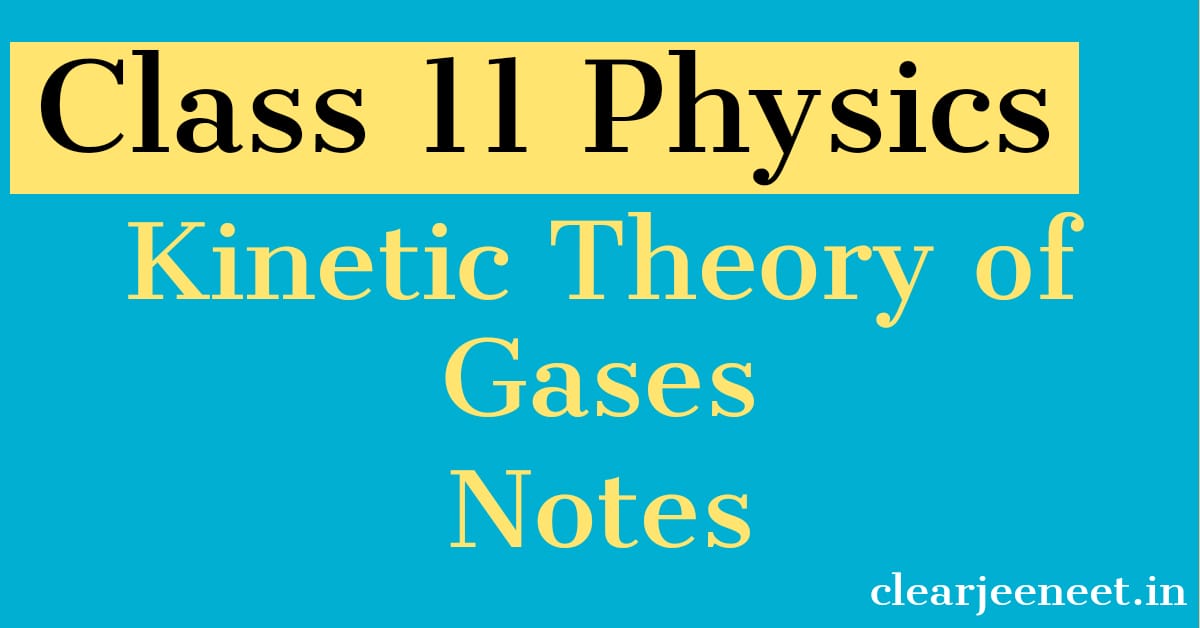 Kinetic Theory of Gases Detailed notes for the prep of JEE/NEET. This note is the best for your competitive exam preparation like JEE.NEET.

DALTON’S LAWThe pressure exerted by a gaseous mixture is equal to sum of partial pressure of each component gases present in the mixture,i.e.,  P = P1 + P2 + P3+……………… PnA relation connecting macroscopic properties  P, V and T of a gas describing the state of the system is called equation of state.The equation of state for an ideal gas of n mole is

The real gas follows Vander Wall’s law. According to this: ;here a and b are Vander Waal’s constant

KINETIC THEORY OF AN IDEAL GAS

The basic assumptions of kinetic theory are :

….(i)where is called mean square velocity and is called root mean square velocityi.e,  ….(ii)and   ….(iii)where m = mass of one molecule and n = number of molecules         ….(iv)or     or   ….(v)where E is translational kinetic energy per unit volume  of the gas. It is clear that pressure of ideal gas is equal to 2/3rd of translational kinetic energy per unit volume.
Kinetic interpretation of temperature : From eqn. (iv), we get

In polyatomic gas molecules such as CO2, it can rotate about any of three coordinate axes. It has six degree (three translational + three rotational) of freedom. At high temperature the molecule can vibrate also and degree of freedom due to vibration also arises, but we neglect it.

LAW OF EQUIPARTITION OF ENERGY

In real gas, we assume that the molecules have finite size and intermolecular attraction acts between them.

The distribution curve is not symmetrical about most probable speed, vP,(vP is the speed, which is possessed in a gas by a large number of molecules) because the lowest speed must be zero, whereas there is no limit to the upper speed a molecule can attain. It is clear from fig.1 that vrms(root mean square) > (average speed of molecules) > (most probable speed) vP

In this case we multiply the number of particles in each speed interval by v2 characteristic of that interval; sum of these products over all speed interval and divide by Ni.e.,  ….(2)Root mean square speed is defined as

where R – universal gas constantT – temperature of gasm – mass of the gasM – molecular weight of gas or mass of one mole of a gas.The average speed of the gas molecules is given by

The most probable speed, the average speed as well as root mean square speed increases with temperature.
KEEP IN MEMORY